Head Coach Dale Atkinson enters his 17th season as the Indian River State College Lady Pioneers Softball coach. In 2014 IRSC advanced to the FCSAA Region VII Tournament for the sixteenth consecutive year. In qualifying for the tournament, the team posted a 43-12 season record and finished the regular season ranked 1st in the final NJCAA national ranking. Under Atkinson’s direction, Indian River has developed into one of the most respected softball programs in the nation with a career head coaching record of 762-192. 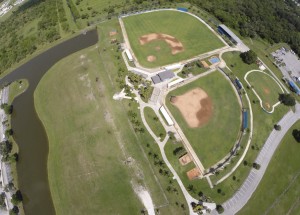 In 2014 the Lady Pioneers will be led by seven returning sophomores and fourteen very talented freshmen.

In the circle, the team has plenty of depth led by 1st Team All- State pitcher, Lissette Garay, and a trio of very promising freshmen, Ashton Adkins, Amanda Weathers and Danielle Giztoski.

Offensively, the team returns 1st Team All-State catcher, Amber Atkinson (.384 batting average, 9 homeruns and 43 RBI’s). Complementing Atkinson are returners, Laura Villigrana (.361 batting average and 26 stolen bases) and Claire Chambers (25 RBI’s). Others expected to be impact players are Sarah Miller and Caitlin Kienne. A very talented freshmen recruiting class will round out what will be a very formidable offensive line up.

With a talented roster of players and experienced coaching staff of Ty Young, Joe DellaRocca and Melissa Braswell, there is plenty of enthusiasm at “The River” for the 2015 softball season!